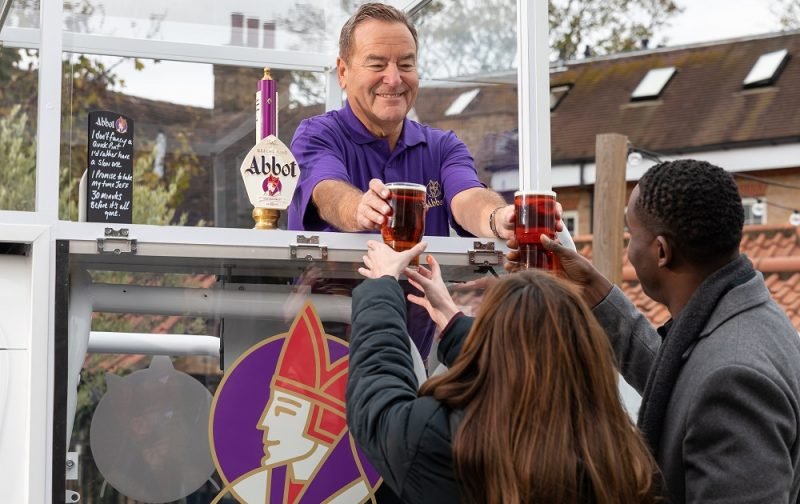 Is it time to slow down?  Jeff Stelling certainly appears to think so.  After 25 years hosting the popular Sky Sports show, Soccer Saturday, the genial host ‘unbelievable Jeff’ is stepping down.  And at the age of 66, who can blame him?

Jeff has explained that he has come to the conclusion it is time to slow down somewhat later than many would like to and has joined Abbot Ale in an attempt to introduce the British to a new pint drinking concept in our ever popular pub culture.

Jeff has taken the ‘slow down’ pledge and I don’t think he will be alone.

Abbot Ale questioned 2000 people and many said they would like to slow down their pace of life at the age of 43.  With lockdown showing many of us that there is more to life than ‘just’ work, maybe it is time for a re-think.

It seems that the EFL is looking at ending the current 3pm blackout rule for screening football, which possible reflects how people now want to consume one of their passions and one of the top ten activities enjoyed by people when not working.  It would also solve the many moans from British managers about fixture congestion, but not only that, it would help us football fans be able to schedule work and pleasure activities far easier, without the constant time changes.

TOP 10 ACTIVITIES BRITS DO – WHEN THEY SLOW DOWN:

The current fast paced life Brits are living means the average adult gets just seven and a half hours to themselves every week.  Is it time to change this, and stop the ‘work hard, play hard’ mantra that many in the UK follow?  We work amongst the  longest hours in Europe after-all.

This has led to Jeff Stelling partnering up with Abbot Aleto get the nation to slow down and savour. He explained:

“As I get a little older, I am trying to slow down! Life is still so frantic but I want to enjoy pleasures like a dog walk, a round of golf or especially a good pint! I say cheers to those who have the option of slowing down that bit sooner than me!”

I am not sure how much he slows down when watching his beloved Hartlepool play, but the concept is certainly right, it is time for us to look to the pleasure of life, work is important but so is time with loved ones and looking after ourselves.  As they say, all work and no play makes Jack a dull boy.