Aston Villa lifted themselves into eleventh place in the Championship table with victory over Derby County on Saturday.

The clash of the ex-Chelsea men saw head coach Dean Smith take further steps forward in the changes he’s trying to make to our style of play, and although for large parts of the game it looked like we wouldn’t capitalise on our on our greater control of the match, the final 15 minutes saw us break them down completely to take a 3-0 win.

Goals from John McGinn, Tammy Abraham and Conor Hourihane give the 90 minutes a better reflection than maybe it should, but clearly there was improvement and steps taken forward – not least another clean sheet for Orjan Nyland and he and the defence should take confidence from that. 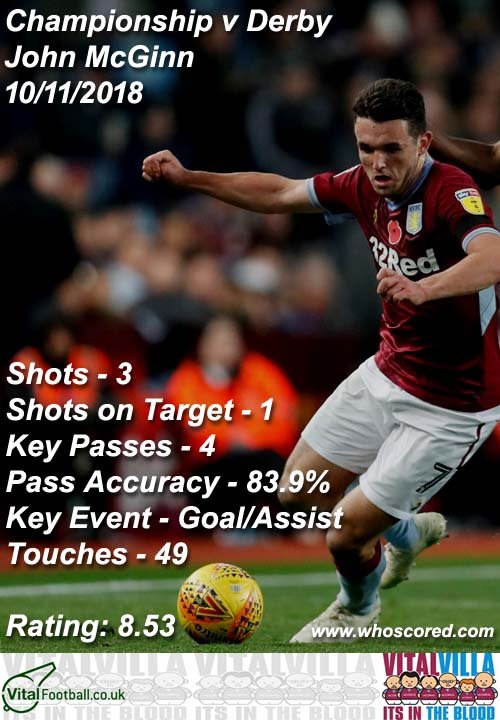 With plenty of fans having their own stand out Man of the Match, and others rightly torn given a number of good performances on the day, Whoscored gave it to John McGinn by some margin.

Scoring the 24-year-old former Hibernian man at 8.53, his closest challenger was fellow goalscorer Abraham at 8.01.

Completing the top five we had Conor Hourihane, Alan Hutton and James Chester.

Showing the improvement in the performance though, Albert Adomah, Orjan Nyland, Yannick Bolasie, Jack Grealish and Axel Tuanzebe (in that order) all received plus seven ratings.